Watch Mike’s extended masterclass on this topic below – part of the Behavioural Insights Summit 2021: 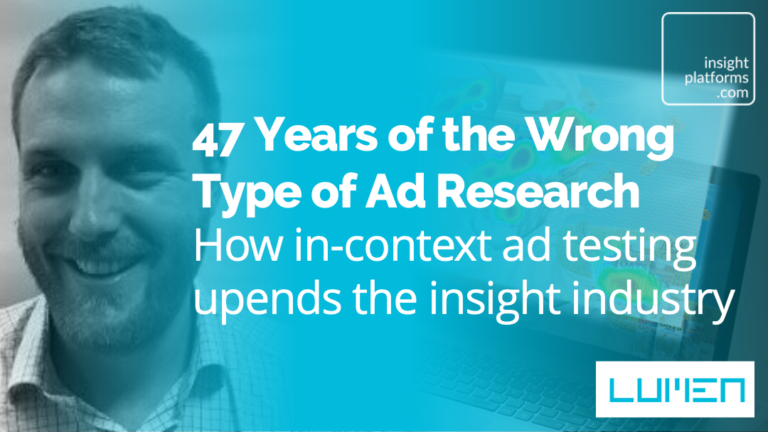 Masterclass: 47 Years of the Wrong Type of Ad Research

How in-context ad testing upends the insight industry If you want to know whether your communications attract attention, it is imperative that you test your creative in-context. But why are so few campaigns tested like this? Why do marketers blithely ... View More …

He must have been a nightmare as a colleague. You can well imagine a nervous junior researcher with a deadline fast approaching going to Alan Hedges looking for a way out of a mess of advertising data. He listens patiently, takes off his horn-rimmed glasses and rubs the bridge of his nose. There is silence. And then he says with a sigh, ‘Well, I wouldn’t start from here.’

And, frustrating as this must have been to hear, he would have been right. In his classic text, Testing to Destruction, which is 47 years old this year, Hedges explains that many of the problems in researching advertising aren’t down to the tools we use or the analyses we employ, but from our starting assumptions.

He argues that we make two fundamental and interrelated errors – about the role of advertising and the role of research – and that until we address these dual failings, we are doomed to facile and ultimately useless research.

And 47 years later, it seems we still have a lot to learn.

The first error that Hedges highlights is our failure to think clearly about how advertising actually works. People who work in advertising and marketing (and the researchers who support them) think that advertising is very interesting and quite important. And indeed it is – to them.

‘[An advertiser] is quite properly very concerned down to the level of fine detail with the precise make-up of his own campaign. He has studied it, argued about it, researched it, worried about it…’

‘With this microscopic focus on the advertising, it is very difficult to stand back and look with the consumer’s eye. Yet this it is very necessary if we are not to lose touch completely with the real nature of the adverting experience.’

And it is the lived experience of advertising that matters. This is brought brilliantly to life in a section of his book called ‘Advertising as Wallpaper’, which charts a week in life of a typical British housewife of the period and her (only very occasional) thoughts about floor cleaning polish. It’s a bravura stream-of-consciousness description that would do Virginia Woolf proud, with layers of consequential detail about quite how inconsequential advertising actually is. The finale is heartbreaking: she doesn’t buy the new brand floor cleaning polish.

Yet, if most people ignore most ads most of the time, then why do we test ads as if people are paying attention? We sit people down, tell them to watch the whole of the ad (sometimes twice!) and then ask them to answer a barrage of questions, often requiring them to parse very nice differences in nuance and meaning.

According to Hedges, such a test situation ‘[is] likely to focus attention on the advertising in a way that is grossly untypical of normal viewing or reading. The whole process of questioning suggests and implants perspectives wholly foreign to the viewer’s normal way of viewing commercials at home.’

‘…much of the effort of advertising comes at low levels of consciousness from repeated brief and inattentive exposures. This is quite the opposite of the way in which test judgements are made.’

If only we could test ads in their natural environment. Back in 1974, this seemed like an impossible dream.

‘Perhaps sometimes our advertising research should examine the impressions created by fleeting or inattentive exposures rather than (as is generally the case at present) by prolonged exposures or forced attention. This is not easy however…the transience and triviality of the consumer’s relationship with advertising makes it difficult to study. As soon as you hold it up to look at it you are removing it from its essential context.’

‘However, the fact that it is difficult to measure or study inattentive communications must not blind us to the fact that this is where the real action is…’

Fast forward 47 years, and many of Hedges’ hopes have been realized.

Researchers such as Zappi and EyeSquare are embracing in-context testing, placing ads within curated Facebook feeds or broadcaster VOD platforms to help brands understand how people engage with their ads in their native environment.

And the development of high quality, inexpensive eye tracking software by companies like Lumen has allowed for a deeper understanding of quite how superficial attention to advertising really is. Hedge’s intuition that most ads get very limited attention has been borne out by thousands of in-context ad tests that we have conducted in the last few years.

However, while technology has advanced, understanding still has far to go. Which bring us to Hedge’s second bugbear: our failure to comprehend the true role of research in the advertising development process.

Hedges’ objective in Testing to Destruction was to rid the marketers’ lexicon of the word ‘testing’. (As he admits in the preface to the 1997 edition of the book, this has been a signal failure). What he objects to about ‘testing’ ads is that the vision of research as judge and jury on the advertising development process: a hoop through which ads have to jump, or a promise of how they will perform.

This, he believes, is a foolish error. We can never hope to develop a full proof test for ads ‘because the world is too complex and because it changes while you study it’. Communication is both risky and uncertain: it is not only dependent on the message you convey, and the way you convey it, but also on the attitude and experience of the audience to whom it is addressed.

Instead of aiming for some spurious precision, Hedges urges us to remember why we are doing all this for. Research is in the service of better decision making

What you are after all the time is a better, more useful, more powerful way of looking at the market than your competitors have.

The research we conduct, and the tools we build, are there to help us understand the world better so that we can act more decisively and successfully. For Hedges, that meant timely and helpful information to inform creative development before an ad went live and evaluate its performance once in market – so you could make an even better one next time. It meant learning and growing in understanding, rather than marking and scoring in isolation.

The researcher is therefore a partner and a participant in the creative development process, rather than a disinterested observer or dispassionate judge. The data that she brings should be as objective as humanly possible, but she should bring her humanity to the process as well. It is the false scientism of research that Hedges hates the most.

I believe that Alan Hedges would have been delighted with the technical progress we have seen in the last few years. The most progressive advertisers are embracing the in-context methodologies that he envisaged almost half a century ago. But he would still have cause to complain about the simplistic and often reductive use to which so much contemporary advertising research is put.  We still have far to go, and perhaps we shouldn’t start from here.

Mike is the founder and CEO of Lumen, the attention technology company that uses eye tracking to measure and predict the reality of visual engagement. Mike has spent his whole career trying to make communications more effective, starting as a planner with BMP DDB in London and New York before heading up the planning department for the DDB group in Mumbai. He returned to the UK to work for Tesco's advertising agency, before doing an MBA at Imperial College, London.